We have now received an update that the Skilling Australians Fund (SAF) implementation date will be in the first quarter of the 2018/2019 financial year which means between July – September 2018.

Since the Government’s announcement of their intention to establish the SAF in the 2017-18 Budget, there has been a piecemeal release of information on the essential parts of the SAF. We, at Gilton Valeo, make it easier for you with a recap of all you need to know about the SAF below:

The nomination training contribution charge will have two tiers dependent on the businesses turnover.

This will replace the existing training benchmarks which are:

As we had advised in previous newsletters, the ATO has advised that the SAF contributions will be tax deductible.

To ensure employers will not be simultaneously subject to the SAF levy and the existing training benchmarks, standard business sponsorship applications lodged from 18 March 2018 to the implementation date of the SAF, will not be assessed for compliance with the previous 457 training benchmarks. However, sponsorship applications that were lodged prior to 18 March 2018 will still be assessed against the training criteria in place at the time the application was lodged.

As you may be aware, the introduction of the Subclass 482 visa program brought a number of changes to the labour market testing (LMT) requirements. The Government has confirmed that once the SAF is implemented, there will be the following changes to LMT requirement: 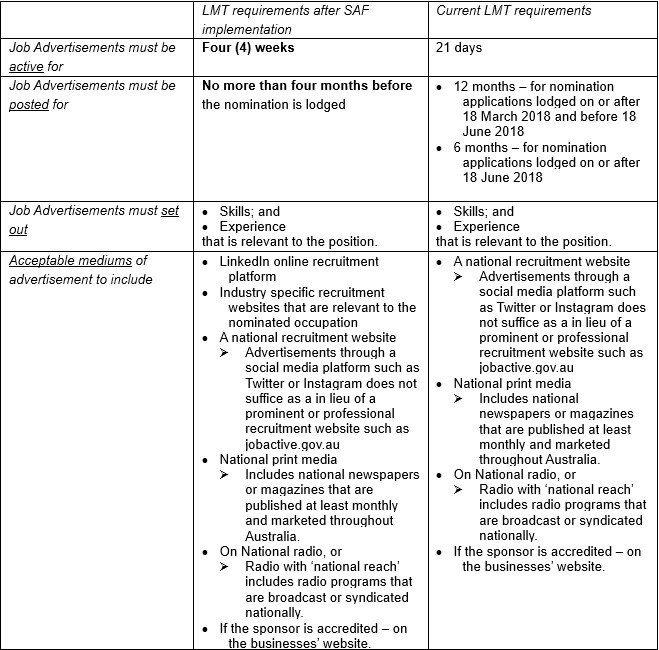 Until the implementation of the SAF, LMT will continue under the current requirements.

What does this mean for sponsors?

Upon the implementation of the SAF, there will be stricter LMT requirements especially in regards to the period of advertisement and the when the advertisement was posted. This would mean that businesses looking to sponsor foreign employees will need to advertise for the position for at least 4 weeks and it must also be recent and no longer than 4 months before the nomination lodgement. On the bright side, the list of accepted mediums for LMT evidence has expanded to include LinkedIn’s online recruitment platform and industry specific websites that are specific to the nominated occupation.

We will keep you updated on the exact implementation date for the SAF, in the meantime make sure to bookmark or save this page for future reference!