Have you ever wondered whether your application for citizenship was being processed in a time-efficient manner? Or in a resource efficient manner? Well ponder no more as the Australian National Audit Office (ANAO) applied these very questions in their most recent audit which examined whether applications were efficiently processed by the Department of Home Affairs (DHA). The rationale for undertaking the audit was encouraged by the Office of the Commonwealth Ombudsman, the Refugee Council of Australia, Member of Parliament and others, who publicly enquired about the length of time being taken to process applications.

On Monday 11 February 2019, the Auditor-General, Grant Hehir, released a report entitled Efficiency of the Processing of Applications for Citizenship by Conferral, and stated that there was a failure to meet basic criteria including:

The DHA has commented on the report stating that “the enhanced integrity measures adopted by the Department over the last three years to protect Australia’s national security and community safety are delivering results. We will always prioritise these efforts over speed”.

In accord with citizenship legislation, ‘the decision maker must be satisfied that an applicant for an Australian citizenship is of good character, and they must not be assessed as a direct or indirect risk to Australia’s national security’. While the number of “complex” applications have decreased, the DHA’s implementation of a risk-averse approach has caused a backlog of applications and increased processing times.

The ANAO has suggested that the “integrity screening arrangements should be made more efficient to lessen their impact on processing times. The majority of applications do not present Home Affairs with a ‘complexity of issues’ requiring lengthy resolution”. Their findings also concluded that the integrity screening processes have not been the sole cause of the problem and the magnitude of the impact was also due to other alarming inefficiencies. As such, they have made the following recommendations: 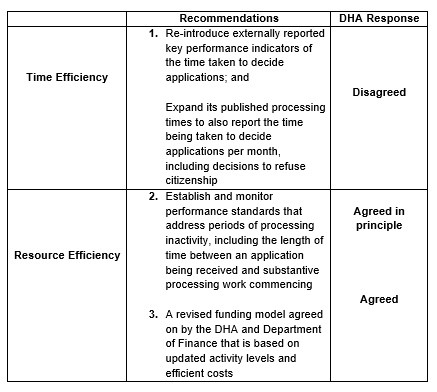 The DHA disagreed with Recommendation 1 for the reason that “…each application for citizenship is assessed upon its merits and individual circumstances, in our view this information would not be meaningful and may be misleading to our clients”. They have however agreed to the other two recommendations and confirmed that “system-wide reforms to the way the citizenship program is delivered are well underway and the Department is already acting to address a number of issues identified by the ANAO in this audit. The Department will continue to take further action as appropriate”.

In the meantime, prolonged processing times for applications means that applicants will have to remain on a permanent visa for a longer than required period.  While having ‘permanent resident’ status seems appealing, it comes with a number of disadvantages and restrictions as permanent residents:

Alongside this, Australian Citizenship also brings a number of obligations, such as being ready to defend Australia should the need arise, to serve on a jury if called to do so and to vote in federal and state or territory elections.

With note to the recommendations, we are optimistic that this will not be an issue for applicants awaiting a decision on their Citizenship by Conferral applications, as the Department continues to implement initiatives under its reform program and expect these will result in further improvements to efficiency and processing times which will no doubt give greater to freedom to those that eligible for Citizenship.