Everything Else Happening in the World other than COVID-19

The whole world is talking about COVID-19.  No doubt it is a transborder phenomena with shuddering impacts that seem to stack on top of each other the more the disease becomes widespread.  From stocks to social distancing, this world event has taken centre stage in our homes, offices and relationships with other people and has become a sort of trigger for changed behaviour.

As important as it is to be aware with the latest updates, there is something slightly self-deprecating about letting this event take over our lives.  At some point we need to remember that this world is big, blue and beautiful.  Yes it can slow down through collective force but it cannot and does not stop.   Inspiring, reverential and important moments are still being created every second and it is a necessity at this stage to shed light on and remember that these moments are occurring alongside COVID-19.

We won’t sugar coat it; this news was hard to track down.  A quick google search of ‘news other than coronavirus’ led us to the following top three results: 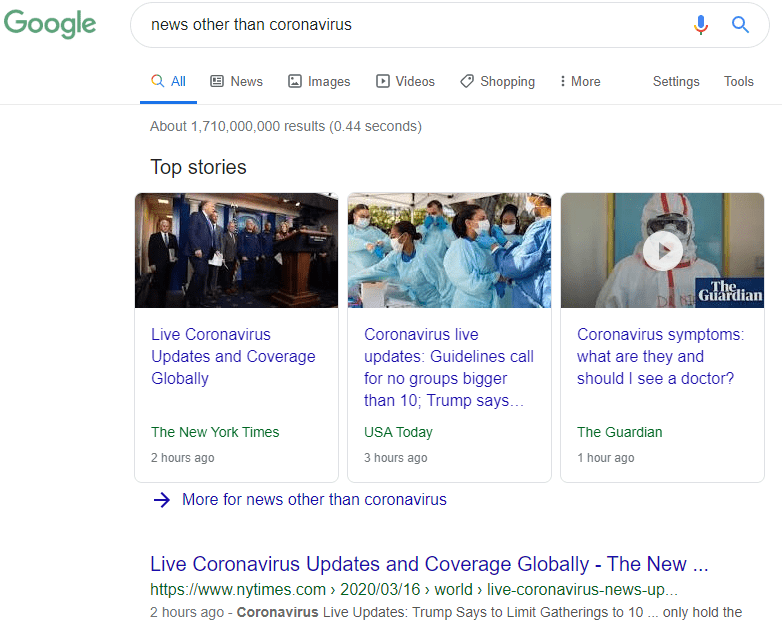 Okay…a little bit discouraging at first but luckily, and with some time, we managed to locate the silver lining.  So without further ado, here is everything else that is happening around the world other than and alongside COVID-19:

A 40-year-old man has successfully undergone stem cell transplantation from donors with an HIV-resistant gene.  Tests conducted post-transplantation showed the absence of the active viral infection in the patient’s blood 30 months after they stopped antiretroviral therapy.

Whilst this treatment is high-risk and currently deemed as a last resort as opposed to ongoing treatment, its second success story provides patients, professors and medical experts with hope and insight into how a more widely applicable cure might be developed and made available in the future.

2. Children with Autism or Sensory Issues Can Buy Vans Shoes Designed Exclusively for Them

As part of the brand’s Autism Awareness Collection, eight pairs of shoes have been designed and developed with a focus on soothing the senses through sound, touch, and appearance.

In terms of functionality, the line of shoes are made up of slip-on models and shoes that can be fitted to the foot with a single strap hook-and-loop closure so that children do not get overwhelmed with tying up laces.

The company has also pledged to donate a minimum of $100,000 in shoe sale proceeds to the A.Skate Foundation – a nonprofit dedicated to teaching children with autism how to skateboard.

Adelaide inventor, Angelina Arora has developed a formula to create bioplastic made from prawn shells – you know the thing we toss after Christmas lunch.  It was discovered that prawn shells completely degrade in approximately 33 days in a landfill and are also rich in nitrogen which is an important ingredient in plant fertiliser.

Since developing the revolutionary invention, the teen has received significant interests from manufacturers, farmers and agriculturalists as the product has a multifunctional ability to reach eco-conscious consumers as well as satiate agricultural fields and composts pits.

The innovation has also earned Angelina the BHP Science and Engineering Award and last year she was named the Australian Geographic Society’s Young Conservationist of the Year.

4. The King of Bhutan Celebrated his 40th Birthday and Asked His People for this One Gift

King Jigme Khesar Namgyel Wangchuck turned 40 years old on 21 February 2020 and to celebrate he asked the people of Bhutan to either plant a tree, adopt a stray animal, or clean up their neighbourhood in his honour.

This isn’t an uncanny request from the King, who regularly rejoices in beautiful personal moments by requesting for the people of Bhutan to do something in honour of the planet and soil. Following the birth of his first son, the King asked his people to plant trees on his behalf, resulting in more than 108,000 trees planted.

It is no wonder that Bhutan has been ranked as one of the most eco-friendly countries in the world.

5. Dozens of Blue Whales have been Spotted in Antarctica For the First Time Since 1980’s Whaling Ban

60 years of whaling has had devastating impacts on population hubs that once were thrivin’ in the coast of Antarctica.  However, researchers at the British Antarctic Survey (‘BAS’) have recently discovered a return of whales to the South Georgia Island off the coast of Antarctica and not just a few but some in large numbers.

Prior to the international moratorium on whaling in 1982, 97% of the blue whale species was lost to extreme and greedy whaling operations.  As recently as 2018, the research mission recorded only 1 sighting and a handful of acoustic confirmations of blues whales.  But the 2020 voyage has logged 36 sightings, totalling 55 individuals – an unprecedented number.  Alongside this, the 2020 expedition has also found evidence of approximately 200,000 humpback whales.

This ocean mammal is one of the earths most important resources when it comes to climate change and climate protection.  Whales, particularly large species such as the Blue Whale play a massive role as storehouses of carbon due to their diet, with one whale taking in more than 33 tons of carbon.

As an immigration law firm, we are proud of the fact that we have provided the incredible activists of Sea Shepherd Conservation Society with pro-bono immigration advice and this news is not only a testament to the conscious of collective governments but also to the work of activists groups like Sea Shepherd.

Yes COVID-19 is happening, but it isn’t the only thing that is happening.  We hope this alternative news broadcast brings a little light into your day amid the fear, concern and seriousness of current and conventional media dialogue.

When read in isolation all these remarkable real-life stories are comforting, but altogether they provide us with an illuminating and important message – as a collective community we can and always will rise above the dark times.

Our final note in the words of Albus Dumbledore: ‘happiness can be found in the darkest of times, if one only remembers to turn on the light.’